This eye looks really painful, and kind of scary. If you went to work looking like this, your boss would probably send you to the eye doctor to make sure it is not PINK EYE. ‘Pink Eye’ is not a medical diagnosis though, and this layman’s term is often used to describe a variety of eye maladies.

This man has a sub-conjunctival hemorrhage that looks scary but will resolve on it’s own.

The dread pink eye is in fact a very contagious condition caused by either bacterial or viral infection of the front of the eye. It is most common amongst small children and people who care for them, and in the parents/siblings of sick kids. If you (or your boss) suspect that you have pink eye, it is in fact a good idea to see a doctor the same day, but it is key to go to an EYE DOCTOR such as an optometrist or ophthalmologist. Seeing a general practitioner at an emergency room or urgent care facility is much LESS likely to result in an accurate diagnosis and appropriate treatment. If you have an eye problem, then you should see an eye doctor.

The eye pictured above was seen by Dr. Mark Cannon (and the patient authorized having this image posted). This eye is not infected, so this is not ‘pink eye’. The gentleman in the photo had only one symptom: mild itch. His vision was fine, and there was no crusting or discharge. He had not gotten any foreign matter or harsh chemicals in his eye. In fact, he did not even know he had a problem with his eye until a friend asked him what was wrong with it. This patient’s intensely red eye is a result of a sub-conjunctival hemorrhage.

We have seven layers of clear skin over the white of the eye, and somewhere in those layers of skin (called the conjunctiva) one of his blood vessels burst. This blood typically collects in one area and then will slowly spread to cover more of the eye, making it look like the condition is worsening over a period of days. Typically the vision is not effected, and aside from a little itch, it is asymptomatic. Sub-conj hemes (the term doctors use) are associated with aggressive eye rubbing which can in turn be caused by blepharitis or allergic conjunctivitis. They can also result from straining to lift or push something heavy, or from vomiting or straining on the toilet. Basically any activity that can increase pressure in the head can cause this to occur, and it is more likely if you are on blood thinners such as Warfarin or Aspirin.

Artificial tears can help with the mild itch or irritation, and your optometrist may as ask you to discontinue contact lens use for a short period. The condition typically resolves over the course of 2-3 weeks, and only warrants further investigation if they keep happening. In that case blood tests would be ordered to rule out clotting disorders, etc. 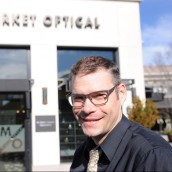